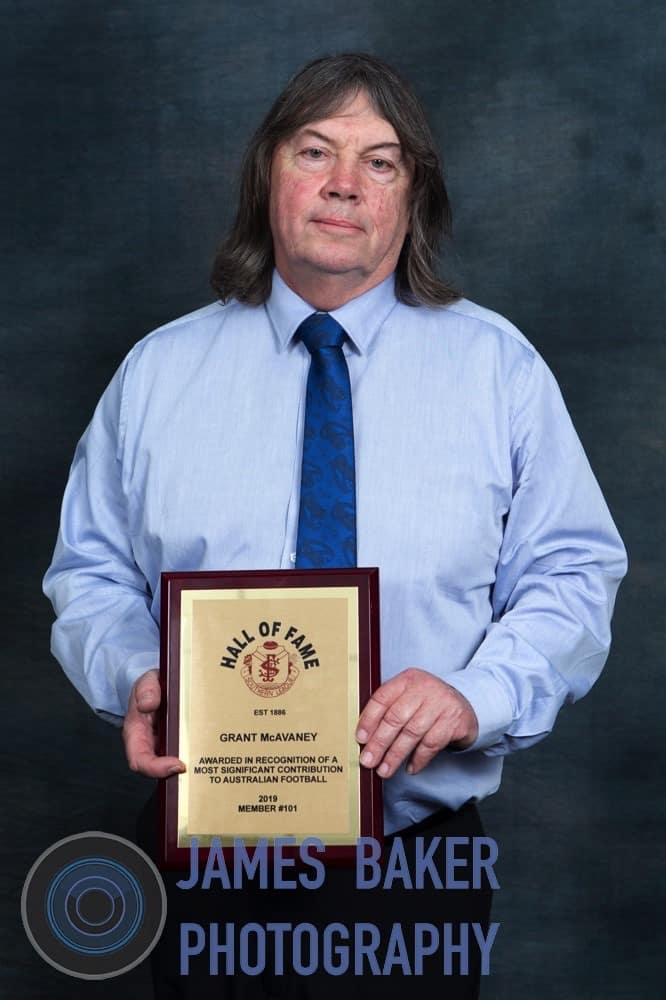 The Flagstaff Hill Football Club wishes to acknowledge and congratulate Grant McAvaney on his well-deserved induction into the Southern Football League Hall of Fame.

At the award ceremony last Sunday, Grant McAvaney was awarded the honour for the significant contribution he has made as a coach, administrator and volunteer to Community Football (most significantly at our club) over the past 30+ years. He also is placed into our records books as the first Flagstaff Hill Football Club inductee.

Grant is another of our club stalwart’s that just keeps giving and looks after more than just his role suggests he should.  Grant’s knowledge, experience, and the thousands of volunteer hours he has given to our club and centre mean that he is an invaluable member and administrator of our club and more than deserving of the nomination and award.

The SFL Hall of Fame Award

The Southern Football League Hall of Fame is established in order to provide due recognition to those who have given outstanding service to Australian Football throughout the League history since its establishment in 1886. The general criterion for selection shall be to have served Australian Football through the Southern Football League for a period of 25 years (which do not need to be consecutive).
Consideration is given on the basis of record, ability, integrity, sportsmanship and character

As a part of the recognition of achievement, the SFL Hall of Fame lapel pin is given to each recipient of Hall of Fame membership, as a visible memento of their award. Each pin is individually numbered and was first presented at the 2010 Hall of Fame award dinner. All recipients receive the pin.

From the SFL Presentation:

Grant McAvaney is the type of person every club needs. He is prepared to perform most jobs around the club and does so on a regular basis. He willingly accepts any match-day role if the regular person is not present. He is present from the start of the match-day until well after the presentations each week.

The Flagstaff Hill President says, “in addition he continues to volunteer for tasks that cross over all areas of our club from Auskick to Subbies to Juniors to Seniors and is at the club involved in these various volunteer activities for at least 5 days and nights every week (and on occasions more) and has been so for years.”

It’s not just the sheer volume of work that he has done but the quality of the work and the resultant impact that he has had on our Club and our League and continues to have that makes his contribution so outstanding.”

Grant is a Life Member of three football clubs (2 in SFL and has coached at U/18 level for some years at Plympton when they were not affiliated with SFL.

His has been a magnificent contributor to football in three leagues.