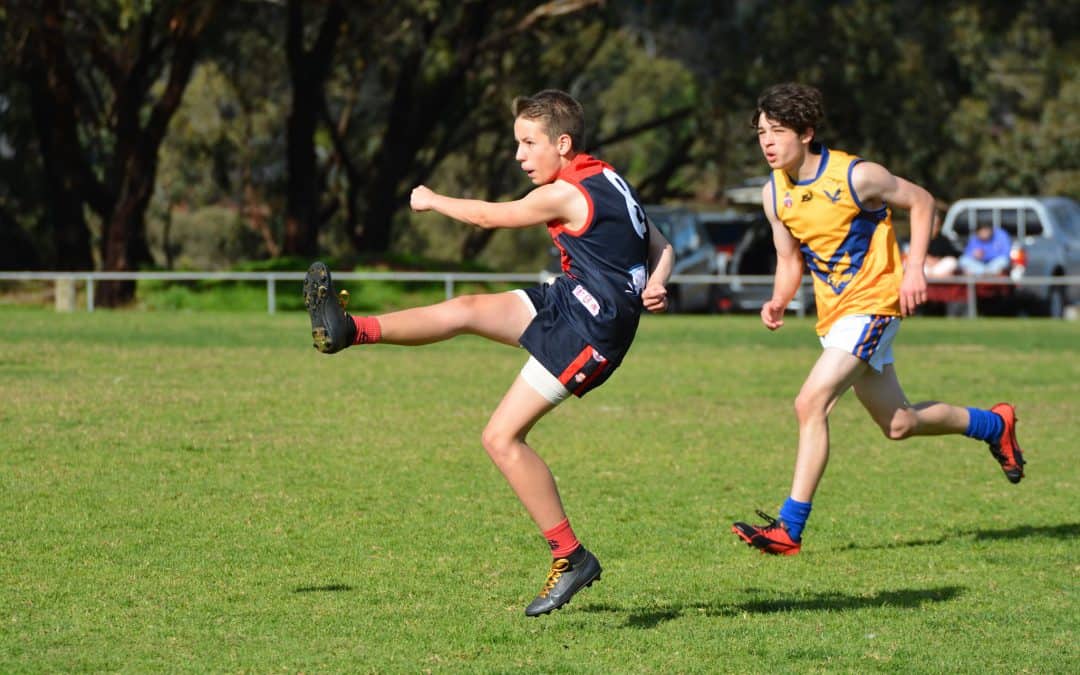 U13 Boys
Sponsored by Harcourts Tagni
Morphett Vale 3.6-24 defeated Flagstaff Hill 1.10-16
Goal Kickers: Y. Antwi
Best Players: M. Clifton, T. Lush, M. Da Silva, C. Carlier, R. Jones, I. Quigley
Not the result we had hoped for last weekend against the Emu’s losing 1 goal 11 to 3 goals 5.
It was a cold and slippery morning but the sun was shining and we were confident of a good result but it wasn’t to be. We had the best of the first quarter kicking our only goal to take the early lead and things looked like they were going to plan. Unfortunately we allowed a late goal to Morphett Vale and they went into the quarter time break with their tails up and a belief they could match it with us. We  certainly had our chances in an even contest but just couldn’t convert in front of goals. The boys, to their credit, fought the game out right to the very end with the ball camped inside our forward half in the last quarter but we fell just short. A big shout out to our U12 players who have been fantastic all season when we need fill ins. Rhys Jones was BOG last weekend and Jack Manion has been a solid contributor every time he has played.
This unexpected result has really put the pressure on us to remain in finals contention but I’m sure we will bounce back. This week will test us against the second placed Porties at home but we are playing much better footy than we were in round 2.
Hopefully I don’t need to call myself a Waaaaaaambulance again this season and see you all at the footy.
Hazz

Goal Kickers: L. Sorella 7, R. Mayr 2, F. Knuckey, T. Berndt, Z. Mayr, J. Scanlan, C. Hibbert
Best Players: Z. Mayr, B. Jeffries, B. Sisson, T. Berndt, L. Ellis, J. Scanlan
The first game in the second half of the season saw us take on Morphett Vale.
We were looking forward to seeing how far we had come since playing them in Round 1.
Whilst we have improved as a team, so had Morphett vale.
They were very physical around the ball and made us earn the footy.
In the end we were stronger for longer with our Captain Ben Jeffries in a milestone game doing the hard work with Zac Mayr in the middle giving great delivery to our full forward Lachie who kicked seven.
We finished the day well with lots of link up footy which looked impressive from the sidelines.
Pt Noarlunga at home next week is our next challenge. Keep up the great work.
Thanks, Steve
Steve Hibbert – Under 15’s Coach
U17.5 Boys
Sponsored by Macnab Finance
Flagstaff Hill 24.17-161 defeated Morphett Vale 3.3-21
Goal Kickers: A. Grayson 5, B. Aldridge 4, S. Burbridge 3, J. Richman 3, W. Nash 2, J. Hackett 2, T. Esser 2, C. Nuske, E. Johnson, T. Brockhurst
Best Players: A. Grayson, D. Kelsey, T. Brockhurst, S. Burbridge, B. Aldridge, J. Richman
Morphett Vale at Morphett Vale can be a tough task, they are a five goal better side there, however Saturday was a different.  We didn’t  give them time to play their style of footy, we played team oriented footy putting immense pressure on them all over the ground to run out winners, 24.17 to 3.3.
One of our better games for the year
Marty

B Grade
Sponsored by Flagstaff Hotel
Morphett Vale 10.6-66 defeated Flagstaff Hill 7.3-45
Goal Kickers: R. McNamara 6, M. Hunter
Best Players: A. Baltagie, R. McNamara, T. Smith, M. Caire, T. Meinecke
Coming into round 10 the boys were pretty fired up to dish out some revenge on Morphett Vale as they knocked us off at home in round 1.
The boys battled hard and responded at times of the game to keep us in touch on the scoreboard. Unfortunately we fell down in our execution of team structures and we were a bit off the pace through periods of the game. We failed to reach some of our team KPI’s which meant we were behind on the scoreboard at the final siren.
One of the biggest positives out of the game was the debut of our U17 Ahmed Baltagie. He battled extremely hard in the Ruck and at times the opposition ruckman tried to rattle him with some dirty acts but he remained composed and deserved his BOG award.
Richie McNamara was our shining light up forward slotting 6 of our 7 goals, Matt Caire worked tirelessly through the middle winning some great contested footy, Tim Meinecke and Tristan Smith were solid in defence winning some great 1 v 1 battles, intercepting opposition kicks and giving us some much needed rebound from defence.
Looking to round 11 vs Port Noarlunga we are extremely determined to bounce back and execute our structures and game style with skill and precision.
Cheers,

A Grade
Sponsored by Tech-Dry SA

Goal Kickers: R. Mountford 4, D. Nash 4, S. Smith 3, E. Wildman 2, M. Renfrey
Best Players: B. Patterson, R. Mountford, D. Kearsley, M. Walton, L. Beenham, N. Mitchell
We went down to Emu Park (Morphett Vale) to take on the side who gave us a big scare in Round 1 knowing that we had to be on our game to get the job done, If that wasn’t enough motivation then we also had our spiritual leader and great of the club, David Kearsley, Playing his 250th A grade game for the club. The first half was good as the rain held off for the most part and we managed to get on top in most aspects of the game, we did cop a couple of injuries which threw our rotations out the window but the boys stuck to the task and we went into the half time break 7 goals up. As is always expected the second half got a bit tougher as they would have spoken about limiting the damage and the rain got heavier which evened the contest up a bit. We managed to run out 7 goal winners for the day after they kicked a couple of late goals. There was no better way to honor DK than to get a gritty win on an overcast, wet day as im sure you have all seen the images of DK recently and he seems to always be covered in dirt and mud but that just opitimises they way he plays the game. Bradley Patterson continued his great form, Mounty was good up forward for as as per usual and the man himself DK snuck in for 3rd best.
Port Noarlunga At home next week so bring it on
C Grade
Sponsored by Charlesworth Nuts
Morphett Vale 13.8-86 defeated Flagstaff Hill  7.6-48
Goal Kickers: B. Cooney 2, A. Peterson 2, K. Abbott, A. Baltagie, H. Simmonds
Best Players: D. Crisa, B. Knuckey, A. Baltagie, J. Bunworth, A. Baltagie, J. Williams

U16 Boys
Sponsored by Followme4wd
Flagstaff Hill FC 12.11-83 defeated Gaza JFC 7.7-49
Goal Kickers: J. Lees 2, J. Keating 2, B. Richman 2, K. Smith 2, J. Langdon, C. Nuske, H. Mahfoud, B. Jeffries
Best Players: K. Smith, M. Pearce, J. Costello, J. Keating, E. Johnson, C. Trott
After being soundly beaten by Gaza in Rd 1 this was a game the boys couldn’t wait to sink their teeth into (so to speak).
This time at home, we focused on our running game and home ground knowledge.
While the 1st qtr didn’t quite go to plan in a couple areas there was still plenty to like. A couple tweaks at qtr time (and resetting a couple players) we started to gain the ascendency. We started to dominate the clearances around the ground and doubled the Inside 50s to the opposition in the 2nd term. We made the most of this momentum and went in at Half Time with a 3 goal lead.
The boys never looked back from there and (apart from a 5 minute sleep in 3rd qtr) and ran out the game with a solid win.
A very satisfying game by the boys with structures staying solid and a host of good individual performances.
We turn our focus to Marion who sit 2nd on the ladder so it’s no time to take the foot off the pedal.
Bunga
WE ARE ONE IN’21

The U14 girls drove out to Christie’s for the 2nd time this year. After drawing with them in the first round we knew it would be a tough game, and we had learned a lot since that first encounter.

The Christies team got off to a quick start, posting their first goal early in the game, and although the girls rallied well they were not able to post a major in the first half.  It almost felt like we were trying to push the ball over the line for a try, whilst the Christies defence was holding strong.

To our girl’s credit, they fought back in the second half but some inaccuracy in front of goal cost us at times. Sienna Aldridge broke the lines several times and kicked our first goal in the 3rd quarter. She also kicked another playing out of the ruck in the last and the game tightened up with only 4 points separating the teams, and Flaggys with all the momentum and speed.  Alas, time beat us in the end, Christie’s running out the winners 3.3-21 to Flaggy 2.5-17.

Best players went to Emma Comley who won the ball out of the middle and gave us first use, Sienna Aldridge played on Christie’s best player, she made her accountable, kicked our 2 goals and gave us so much of our run. Sophie Vowles was brilliant in defence with her strong marking, she then played up forward and performed very well.
Zoe Hodgson in defence was terrific as was Abby Sorella and Erin Smailes. The girls thwarted many scoring opportunities and gave us great drive out of defence.
The endeavour from start to finish was exceptional, unlucky not to get the rewards in the end but we hope to get another opportunity later in the season.
Dave Hodgson
FH 10.4.64 Def HV 1.1.7