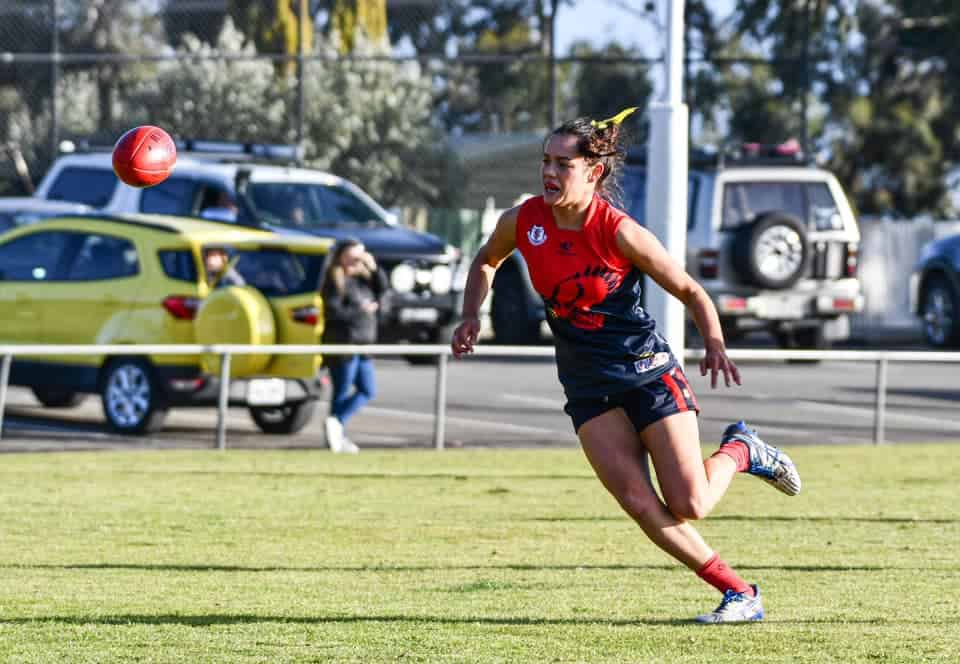 Round 2 saw our first home game of Season 2020 and it was against our close neighbour and bitter rival Happy Valley, we played off for the annual Baxter/Farrell trophy which we have held for the last 4 years and we did not want to relinquish this year. The Vikings came into the game full of confidence after beating Port Noarlunga in Round 1 and firmly believed they were going to beat us on our home deck, I am pleased to say however the boys got the job done in the end with a 24 point win. There was a howling wind blowing to the southern end all day and we were kicking into it in the 1st 1/4, we controlled a lot of the ¼ but gave up some easy goals due to silly turnovers and unlucky free kicks which saw us 2 goals down at the break. We didn’t panic as it was at least a 4 goal breeze so we knew if we stuck to the task we would get our chances, as per the previous week the opposition put a loose in front of Webby which made his job hard all day but we went into half time 2 goals up. The 3rd ¼ was tough into the breeze again but we more than held our own and were only 3 points down at the last change and with the Happy valley flooding back scoring was difficult but we managed 4 goals 3 points in the last to no score to run out 4 goal winners. Brad Kirk was instrumental all day (made easier by being loose most of the day

)  and set up many attacks right to the final siren, Mark Hollis in his first game for the year was fantastic and Chris Puiatti did a lot of grunt work through the middle for us.

Next up Christies Beach @ Bice oval. See you there!

Congratulations to Brad Kirk on winning the Bob Farrell Medal

The B Grade produced another solid performance in Round 2 against the old rival Happy Valley, winning by 12 goals.  The boys started well with two goals in the first two minutes and didn’t look back.  Kobe Cavouras, in his 150th club game, was best afield and was ably assisted by his fellow onballers.  The forwards had a second week of accurate kicking in front of goal and the back line maintained their discipline throughout the game despite the widening gap in the scores.  Overall, a good win by the B Grade; who will now turn their attention to Christies Beach with whom they have shared many close battles with over the last few seasons.

Saturday we played last years premiers and due to many of the lads going to school together bragging rights were on the line.From all reports there were a few words said before the game when Happy Valley decided to warm up next to us and poor old Brocky had to hide his goal umpiring flags in case they were used as weapons. The boys played a physical, skillfull, uncompromising style of football that had Happy Valley on the back foot early. That type of football is the standard that is required of a top 4 team. We had 22 scoring shots to 5 for the game which shows our dominance.  Converting a few points into goals is the next step.This week the boys have shown true Flaggy spirit in what can be described as i guess a ‘disruptive time’ for the group. Although disappointed, the lads have remained loyal, supportive and honest with me and their team mates. Well done to the lads and the parents.

After a disappointing start to our campaign last week the boys were keen to make amends against Happy Valley.With both teams going into the round looking to improve, we knew it was going to be a good game. Both teams used the strong wind to their advantage, but with us finishing with the wind in the last quarter it made for a nail biting finish. With Flaggies needing two goals in the last few minutes for the lead, all the boys fought hard to achieve this and get their first win. The final goal coming seconds before the final siren to give us a 4 point win. Great team effort. Well done boys. #goflaggies

Round 2 saw us play against Reynella in the Grand Final rematch for our first home game of the season. I asked for a fast start and bring the intensity and pressure early and to the team’s credit they did exactly that kicking 3 goals to nothing in the first. The girls maintained the pressure and were super impressive, in tricky windy conditions, winning the contested ball and spreading to show some exciting running football for the rest of the match to run out winners 6.5 – 41 to no score.

What was most pleasing was the even contributions across the board and the way they worked together and protected each other to win the football. We now face Port Noarlunga, away, who currently sit top of the ladder so we know we are going to have to bring our best once again.

Craig Bunworth
SANFL Under 16.5 Boys
vs Modbury – Away

What a week in footy. We headed to Modbury (Greenwith) after the regrading of our comp and it was always going to be a good contest against a side that had similar results to us.We congratulate Deccy Quilliam notching up 50 junior games for the Falcons with also Jimmy Keating coming up from U15’s also notching up the milestone and what a game to do it!

They had a massive cross breeze which could have been difficult to contend with the quality of footy was exceptional. We structured up well in the first quarter and ball us was high quality and could be a lot more ahead at the first break. 2nd and 3rd quarters were an arm wrestle and we went into 3 qtr time 18 points down but the boys had belief. The team reset to confident, run on footy and came home with a four goal to none last quarter with a goal after the siren by Jacko Williams (with help from a 25m penalty) to steal the win. Great team effort all round and well deserved.

We now head to Golden Grove for round 5 and hopefully give them a run after they ran away with the win in round 2 after half time.Thanks for all the support at the game last Sunday and help this group grow in confidence with every game.

We played another strong club in Reynella this week it didn’t start as well as we like but the improvement the girls are showing is tremendous with us out scoring Reynella in the second half to go down by 11 points. This week we head down to Port Noarlunga hopefully come home with a win.
Go Falcons

Paul Hollands
SANFL Under 15 Boys
vs Tea Tree Gully Away

Unfortunately our game at TTG was stopped in the 3rd quarter due to Zac Mayr suffering a injury which required an ambulance taking him to hospital.

After a series of scans he was given the all clear and allowed to go home. Thank you so much to Lenny, Jo, Tracy & Shane who provided great care for Zac while we waited for the ambulance.