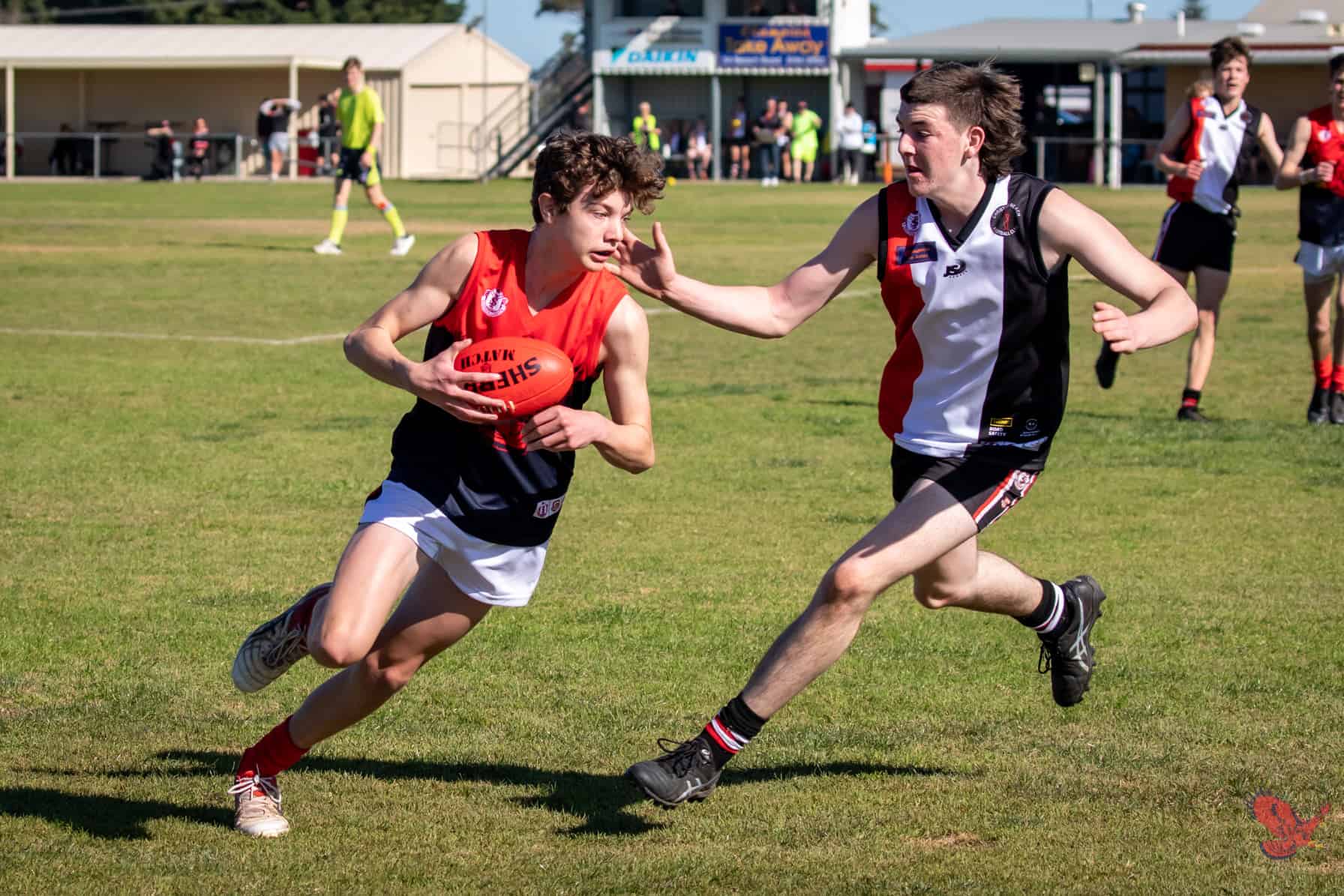 We took on Christies Beach @ Bice Oval this week and it was the challenge the guys had been waiting for. There had been a lot of talk about Christies and how good they looked this year and that they were fitter than all the other sides after running over Noarlunga & Reynella in the first 2 rounds. My boys took this personally as did I and they were up from the game from the get-go. The mids started well and gave us plenty of looks at it in the 1st ¼, Christies kicked a late goal, but we still went into the break up 6 goals to 3. The second ¼ saw us raise our pressure on the opposition and really stamp our authority on the game and we held them to 2 scoring shots for the ¼ while we had 5 to extend our lead to 5 goals at half time. As a group we spoke about the need to sustain or even raise our level of pressure and intensity as they are a good side and would come at us at some stage which they did, the 3rd ¼ saw them score 3 goals however we still had control of the game but with 8 scoring shots only resulting in 2 goals 6 points we still had work to do. Christies tried a play on at all costs style in the last ¼ hoping to get over the back of us but as we had done all day the boys stuck to our defensive structures and managed to weather the storm, we had more inaccurate kicking in the last but ran out 38 point winners in the end. It was a great effort from the whole 22 but young Ryan Mountford was fantastic all day with 4 goals and Max Renfrey gave some great drive from the half back line all day.

Special thanks to Blake Aldridge for manning the Video Camera for me.

Next up Port Noarlunga @ home.

As expected, we came up against a very strong opponent in Christies Beach on Saturday.  Following tight contests in the B Grade over a number of years, this was no different (although both sides were vastly different by the way of fresh faces).  Christies got on top early with a few early goals and much cleaner skills but we were able to improve through the middle of the match and by early in the last, held a 15 point lead.  But they were not done and with two quick goals, we had a very nervous finish to the game.  Impressively, the boys withstood the challenge and held out for a 3 point win.  It was great to see some young talent get an opportunity this weekend in senior footy and the result should do the teams’ confidence a good boost moving forward.  It was very much a finals like day, given the strong opposition, sun shining and big oval and we hope to get another taste of such footy later in the year.

Saturday we played against Christies Beach at Christies Beach in what was a danger game for us.Christies have a majority of second year players in their team and finished third last year, so they were going to be a challenge.We had to make a number of changes from last week and the pleasing thing was that the inclusions did not miss a beat. Its nice to have players that want to learn, listen and improve. It was encouraging to see a complete team oriented game.  Even a Christies Beach player said to me after the game that we were a good allround humble team. We doubled their scoring shots however we just need to tidy up our forward entry and we are a 6 goal better side.Well done, box ticked and now for next week.

The boys have faced a tough start of the season, from playing an over aged trial v Blackwood u16s to playing the probable top 2 teams away in Reynella and Christies in the 1st month. We have learnt a lot about the ourselves and in patches we have matched the best, as evidenced on Saturday. We clearly know where the bar is set and we have 6 weeks to reach it. I’m confident we have significant improvement in us. Huge game for our season this week against Porties.

Round 3 saw the Club travel to Christies Beach FC to take on the Saints. This weeks team had 4 debutants with U12 players joining the ranks.Well done to Tyce Lush, Cohen Collier, Mason da Silva, Riley Pedrick and Cade Gould came in for his second game as an emergency. The focus was on team footy and running harder and longer on the biggest oval in the league. The boys played great link up footy which resulted in some fantastic plays.All the u12s took advantage of their opportunity and loved taking on some bigger opponents.All the boys played well on the big oval with the space working to their advantage and being able to switch the play.A very pleasing day from the team and we now switch focus to taking on Port Noarlunga at home.

Round 3 saw us travel down to Port Noarlunga to face undefeated Cockledivers team. It was a fierce contest all day with our girls having to survive three lead changes in the last to hold on and win by 4 points. The girls lead for most of the day in a very low scoring match, the first goal was scored by Porties on the 3 quarter siren giving them a 1 point lead. I knew our best was good enough but with no interchange I asked our girls for the hardest working, most aggressive Flaggy footy we’d ever seen and with a never give up attitude they did exactly that. With a handful of minutes remaining the girls used outstanding skill and composure to work the forward and set up Ebony Scanlan for the set shot for the lead which she in fact nailed. The girls then held on for the win. We had a number of strong contributors  across the day however, Ebony Scanlan and Mel Anderson were outstanding along with Tia Taylor who played her best game for the club. We now turn our attention to arch rivals Happy Valley, this will be the first time in our history that we will face off against them in the girls competition too.

Craig Bunworth
SANFL Under 16.5 Boys
vs Golden Grove – Away

After a win after the siren last week, it was our focus to use that momentum into our game against Golden Grove this week.We went down by 46 points last time so we were confident of making a better fist of it this time out.Unfortunately we didn’t get the start we needed and found ourselves well behind the eight ball at half time.But with a bit of Flaggy spirit and determination the lads dug deep and won the second half. It was all to late though and went down by six goals.Plenty of areas to work on but a bucket load to like about where the group is at. They are an enthusiastic mob and look to be really enjoying the opportunity to have a run around on a Sunday with their mates.I thank the U15s again for their help with another five lads having a run with us with Cam Nuske making his U16.5 debut.We turn our attention to Athelstone this Sunday who are sitting top of the table but I feel we have something brewing which just might give these blokes a bit a run for their money.till next time…..Bunga

WOW what a week for the under 14 girls. Unfortunately we had a couple of late scratchings which saw the coaching team shuffle the board around to find the right combinations. Boy did we we start the game full of confidence. By three quarter time we had a handy lead and though Port Noarlunga tried to fight back but our defence stayed strong and we ran out winners by 13 points. This was our first win of the year, I was so proud of girls they really deserved the win for all the hard work they have put in so far. No doubt many more wins ahead.

The boys faced Blackwood for the 2nd time in 2 weeks. We knew they would provide stiffer competition this week and had to be prepared for a tough first 10 mins. We withstood their aggression and started hitting the scoreboard which immediately deflated them. All played well with the majority of the boys playing their best game for the season, another tough teat awaits against old SFL foe Brighton this Sunday at home, our last home game for a while.