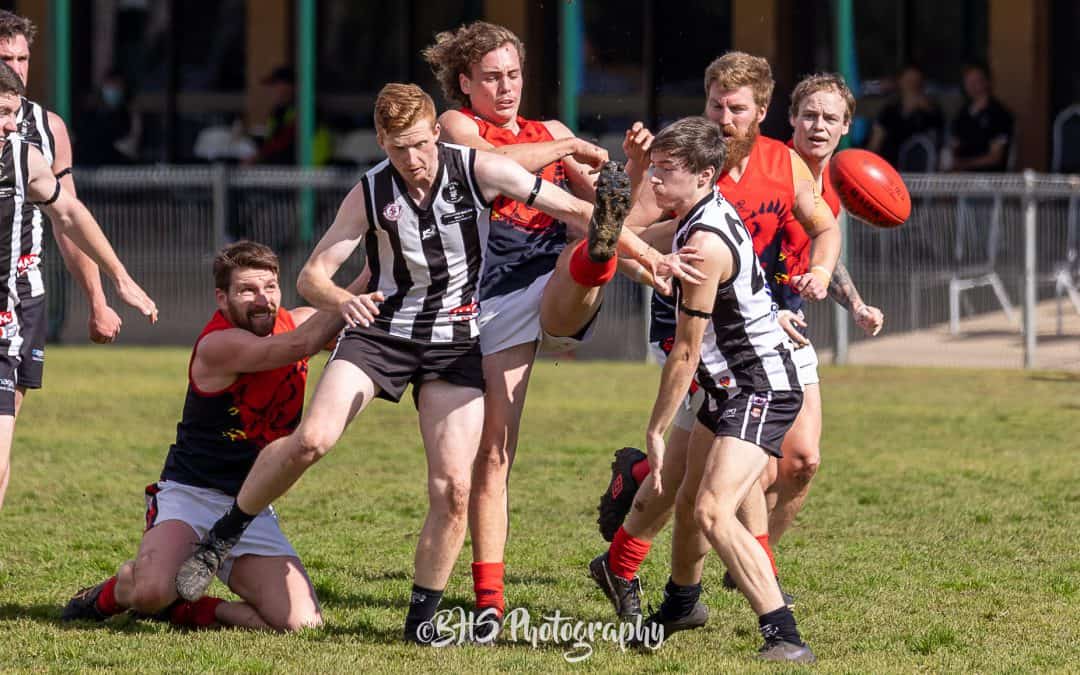 A really tough hit out for the U13 Boys against the league leader and clear premiership favourite in Reynella. We were all aware of the challenge the game would present and the boys came out hard in the first quarter matching it with the Wineflies to go in at quarter time with the scores level albeit 0 0 apiece. We tried hard in the second but Reynella, with their bigger lads, started to get on top and had a 3 goal lead at half time. The third quarter is where the damage was done and they ran away with the win. To the boys credit they didn’t, nor have they all season, lay down and they fought the game out to the very end. Isaac Quigley was fantastic across half back and Mitchell Clifton and Tyce Lush gave us a great contest around the ball. We now know our best footy can match it with them and look forward to hopefully meeting them again in the finals.This week is a massive home game against the old rivals the Vikings. A win here will all but guarantee us finals football and the boys are pumped. Bring it on.

See you at the footy Hazz

U15 Boys
Sponsored by City Rural Insurance
Reynella 5.3-33
Flagstaff Hill 9.7-61
Goal Kickers: L. Sorella 5, T. Rymell, T. Crosby, S. Burbridge, H. Slattery
Best Players: C. Johns, H. Nash, T. Crosby, K. Smith, R. Mayr, S. Burbridge
After a month with no footy for our team and club it was less than ideal going into a top of the table clash.
Reynella did a number on us at home last time and left us with lots to think about and work on.
We have pushed the boys pretty hard at training over the last few weeks to replicate games and fitness. And they responded.
Going into the game I was quietly confident of the boys’ improvement and chances of upsetting the Wineflies on their turf.
We had a few changes into the side from injuries and sickness and it proved the difference.
From the first bounce our boys attacked the footy and hunted in numbers. It left our opposition scrambling and making uncharacteristic mistakes.
It was fantastic to watch.
Reynella hit back into the second and third qtr but the boys held firm and kept their foot on the throat as they say and matched them for goals.
It was a pleasing finish with us keeping them scoreless in the last and us putting it to bed by kicking another couple late goals aided by some amazing link up handball and movement from up the ground. Teamwork at its best!
This win means so much for our team to install the belief in themselves. It’s a belief I’ve always had about them and have tried to get them to believe in but now they acknowledge it too. Gold!
As a coach it’s the best game I’ve been involved in and I couldn’t be prouder of the lads and all their efforts in a four qtr display. Great timing coming into finals.
Don’t be happy with that. Raise the bar again.
Well done lads
Steve Hibbert – Under 15’s Coach
U17.5 Boys
Sponsored by Macnab Finance
Reynella 13.9-87
Flagstaff Hill 2.7-19
Goal Kickers: J. Morehouse, A. Baltagie
Best Players: B. Aldridge, J. Costello, L. MacNab, A. Baltagie, J. Faizal, W. Nashr.

A Grade
Sponsored by Tech-Dry SA
Reynella  9.11-65
Flagstaff Hill 12.11-83
Goal Kickers: N. Beenham 3, D. Butcher 3, C. Puiatti 2, A. Shearer, S. Smith, M. Johnson, T. Carney
Best Players: M. Johnson, B. Kirk, H. Channing, B. Patterson, N. Beenham, B. Heyward-Ferors
After what had felt like forever off we finally got to play some football again, The A grade had their Round 12 clash with Noarlunga called off just after half time way back on July 3rd and had not played a competitive match since, meaning we had 5 weeks between matches. It really felt like round 1 again as it had been that long so we made a specific effort to get the guys mentally back in the game and it seemed like everything we had done over the break had worked as we came out against the side 2nd on the ladder and won the 1st quarter 4.4 to 1.2. The second quarter was even better with the lads scoring 6.2 to 3.3 to head into the break 37pts up, our backs were working well, fwds were kicking goals when they got the opportunity and the mids were working hard. Just before half time we had Tynan Carney and Sam Smith come of with ankle injuries leaving us with only 1 on the bench for the second half, this situation got worse when we resumed after the break as Nash Mitchell tweaked his hammy again and Michael Shearer was put on ice with Hamstring tightness aswell. This meant that Sam Smith (in his 150th A grade game) had to go and stand at Full forward for us on one leg which he did gallantly. The 3rd quarter was a loss for us as Reynella could see we were running out of soldiers and that lifted their spirit and they were emotionally back in the game, the injuries plus probably our worst quarter of football for the year meant we lost the quarter 1.4 to 4.2 with Nathan Beenham scoring our whole score for the quarter. We had full faith that having a 21 point break at 3/4 time and our superior fitness would be enough to get the job done which it was and we ran out 18 point winners. A bit closer than i would have liked but i was very proud of the boys the way they ground out the win. Mitch Johnson was good all day, Brad Kirk was instrumental in the second half repelling their attacks numerous times and Huw Channing got asked to ruck all day which he did very well.
Happy Valley is up next who are 3rd on the ladder and will be no easy beats.
I hope to see everyone at the oval on Saturday
Russell Veenvliet – A-Grade Coach

Flagstaff Hill 11.7-73
Cove 1.6-12
Goal Kickers: E. Brockhurst 10, J. Andrews
Best Players: K. Rodman, E. Brockhurst, R. Crockart, R. Mitchell, A. Baker, T. Morriss
A grade women took on Cove at home. Cove were boosted by having their SANFLW players return to their team and also were keen to get a win for Renee Ullrich who was playing her 50th game which is a great achievement for Renee and the Cove women’s program which is progressing really well.
Flaggies were slow to start but got going halfway through the first quarter and then didn’t look back with Kelsey Rodman playing a great game for her first one back after injury and Riley Mitchell dominating in the middle and Shay Lee Dayman shutting down the dangerous Sam Franson.
The second quarter is when the Flaggy girls really started to show how good they can be kicking 5 goals with Emily Brockhurst starting to hurt the opposition with her forward dominance. Emily went on to kick 10 goals as Cove had no answers down back with Flaggies providing repeat forward 50 entries.
The really pleasing part about the game was the back 6 for flagstaff hill who combined fantastically well to repel numerous Cove attacks and restrict them to only 1 goal for the day.
Flaggies ran out winners 11.7 = 73 to Cove 1.5 =11
A couple of weeks to finals which the squad is really looking forward to.
Andrew Brockhurst
C Grade
Sponsored by Charlesworth Nuts
Morphett Vale 12.11-83
Flagstaff Hill 5.7-37
Goal Kickers: L. Abbott 3, M. Wright, B. Aldridge
Best Players: D. Crisa, K. Abbott, J. Bunworth, T. Esser, S. Abbott, B. Aldridge
Cheers Wade.
U17 Girls

After a couple of weeks break we return to play in the biggest match of our season to date. Facing the undefeated Christies Beach at home. We started well and went in 1 point down at the end of the first. In the second it continued to be a hotly contested game with both teams laying strong tackles and rebounding well from defence. In the third we were up against it but our defence held strong to only concede 1.6 and going into the final break 10 points down. The girls threw everything the had and were able to kick a goal within the first few minutes of the quarter and with 5 mins to go kicking another to take the lead by 3 points. Christies then managed to get a roll on and transition the ball forward having 3 shots on goal in the last 4 mins of play. Our defence was able to hold strong and some inaccurate kicking from them meant we held on to win by 2 points and claim equal first place on the ladder! It was a really powerful team effort by the girls and was super pleasing for the hard work over the last month of training. Abbie Butler was outstanding in Ruck all game with Brooke Kleinig (1 goal) & Ebony Scanlan winning lots of the ball and setting up the team’s attacks. It doesn’t get any easier for us now travelling down to Happy Valley next week to take on the 3rd placed team.
Hopefully see you all there

U16 Boys
Sponsored by Followme4wd
Lockleys 6.9-45
Flagstaff Hill 5.1-31
Goal Kickers: R. Stone 2, H. Mahfoud, K. Smith, J. Bishop
Best Players: J. Keating, J. Costello, E. Johnson, R. Stone, K. Smith, B. Richman
Bloody great to have footy back.
We travelled to Lockleys for the 2nd time this season and thanks to them they donned the clash guernseys this time (although the supplied clash guernseys were red and blue….?)
Anyway, we scraped over the line last time and knew this was a game not to take lightly. Conditions were perfect for footy and the opposition were playing skillful footy and had us on the backfoot at quarter time.
We came out stronger in the 2nd quarter and played a great running game and got our noses in front.
Our 2nd half however, we couldn’t quite match their run and went down by a couple goals. Unfortunately Flynn Harris also copped a heavy knock and was sent to get checked out and hopefully he recovers ok.
We have been fortunate in the SANFL comp to have our fixture being played out in full so gives all the lads a good taste of footy.
We now look to next week playing back home before (hopefully) the big event of Stoney playing the big one in the C Grade.
WE ARE ONE IN ’21
Cheers, Bunga,
U14 girls
Sponsored by Subway O’Halloran Hill
Flagstaff Hill 9.10-64
Cove/Morphett Vale 0.0
Goal Kickers: K. Smith 2, S. Aldridge 2, G. Roberts, A. Marlow, S. Richman, S. Clutterbuck, A. Sorella
Best Players: K. Smith, Z. Hodgson, S. Aldridge, S. Clutterbuck, S. Richman, P. Brookes
The U14 girls hosted a combined Cove/Morphett Vale team on the weekend. Having beaten them in the first round the girls were confident in their abilities and chances of a repeat.  The ground was a little slippery but much improved conditions to the last game we played and even though we had a slow start it wasn’t long before they started to hit their straps.
Goal kickers this week were Kyah Smith and Sienna Aldridge 2 goals each, Georgia Roberts, Alyssa Marlow, Sophie Richman, Sophie Clutterbuck and Abby Sorella all with a goal.
Best players were Kyah Smith, Zoe Hodgson, Sienna Aldridge, Scarlett Clutterbuck, Sophie Richman and Peyton Brookes who played outstanding games.
The final score was 9.10-64 to 0.0-0. The ball didn’t travel vey deep into our defence during the last half but it was great to see a disciplined forward line which allowed ample scoring opportunity and space.  Well done to the girls, the club and the SFL for keeping footy alive in these tricky times.
Dave