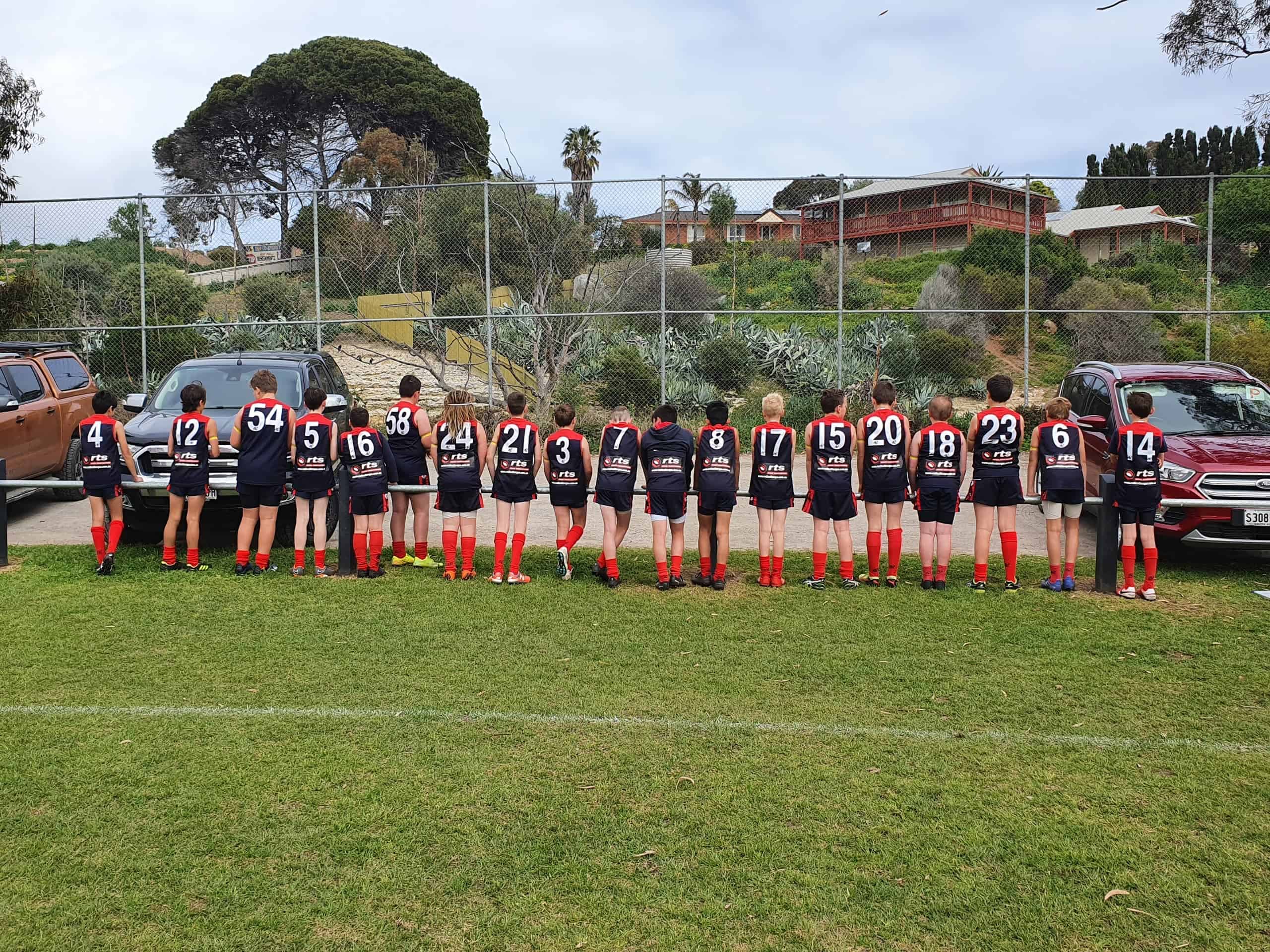 The Under 8’s Blue team had an excellent season. Starting off with many first year players, we developed our skills really well each training and game day. We had a great group of players, who got along really well with each other, making training sessions enjoyable (with the odd exception for weather). It was terrific to see that each and every player had a stand out game across the season. As we progressed, the confidence in all of our players grew, which will help everyone when they (hopefully) return next year to play. A big thank you to Bec for assisting in everything; John Murphy for assisting each and every training and game day(rain, hail or shine); Leigh and Nichola Gould for their support in assisting at training and as medical trainer on game day.

What a great season had by the under 8 white’s this year. COVID-19 certainly put a spanner in the works, but it didn’t seem to phase the kids on a Sunday morning. The boys played some huge games of football and really gelled as a team from early on. It’s great to see such development and growth in confidence and character, over the last few months, within our team. It’s been a pleasure coaching them this season and I can see big futures for so many of these kids, here at Flaggy and beyond! I’d also like to thank all the parent helpers this season as well. We couldn’t do it without you.

What an incredible year from my U8 Red Champs!
We had our ups and downs like most, but in the end, even though it was a shortened year we finished with such a determined, passionate, skilful and supportive team that I am super proud of.
Along with the support of my teams parents, I’d like to say a massive thanks to Nicole, Sarah and Andrew for helping each week run as smoothly as it did. I couldn’t have done it without you all.

It was a pleasure to coach the Under 10 Falcons in 2020. As a younger group it took the team a few weeks to get used to the pace and extra physicality of Under 10s, as well as getting used to team mates’ names. However, the last half of the season saw the guys blossom and despite running into some bigger opposition on a regular basis they gave as good as they got and showed great improvement of skills and teamwork. Some exciting passages of play, excellent tackling and more regular scoring really had the team buzzing with confidence. I think our team spirit regardless of the progress of the game was to be commended, the team always upbeat no matter the situation. As the majority of the team will return next season as under 10’s- I encourage the club to keep this group together, they will be a force to be reckoned with in 2021.

A huge thanks to my official volunteers- Jean Jackson-Green, Steve Smith, Simon Waldeck and Marcus (and Belinda!) Whitting, as well as all the parents who goal umpired, helped at training, BBQ, Canteen or any other assistance on game days- most appreciated. A special shout out to the Athey family who continued to attend/volunteer at game days and trainings despite poor Callum’s season of injury- a great example of team spirit! Finally to Tara Waters for your amazing photos of the boys- one of the highlights of each week was seeing your game day snaps in our team Facebook page!

So Falcons- keep working on your skills, listen to your coaches and continue to have fun. Thanks for having me!

The Flagstaff Hill White team had a fantastic season representing the club this year, Nick Harrison and I along with the help of Cam Chapman had a fantastic time helping them all develop their skills. I feel great they got 8 games in and I know they were really pleased to post 5 wins (without a scoreboard, just a few little computer brains working overtime!)

Highlights of the year are always how much fun the boys are having while improving their skills and learning how to improve as a team, while I know we all enjoyed our first game against Reynella and our last 2 games of the season with a thriller down at Noarlunga and a solid effort against Morphett Vale to show how much we have improved.

Most of all thanks to Kojo, Jack A, Blake, Jacob C, Mitchell C, Joel C, Oliver, Zac, Noah, Ryan, Jack L, Mitchell M, Joel Quigs, Jacob S, Coops, Jake and Deccy for always rocking up to training ready to get that little bit better each time and playing the games with great spirit and determination and (sometimes) even keeping to their positions!!

To all the parents thanks for putting up with a really weird season, we always had great support and people willing to help out with the extra little jobs that pop up. Thanks to Priscilla for being our first aid hero each week and of course thanks to Mel and Michael Haslam for keeping the white side of Flaggy running smoothly!

Also a special thanks to the unofficial team managers from the Under 15’s Will L and Harrison S who ran a lot of our pre game routine and umpired scratch matches at trainings – true Flaggy spirit!

Looking forward to a bigger and better season in 2021!! – Go Flaggy

It was a fantastic year for the U12 White side albeit a shortened season. It was great to actually get out on the oval and have a run around. As with every year there was a mix of old and new faces. The first year players had a crack and will certainly lead the team well in 2021. They played a variety of positions each week and are learning all the time. As for the second year players it was great to see their progression. We did a lot of work on holding onto the ball and retaining possession so to see it on game day was pleasing for both myself and Clayton. We had quite a few players play up in the 13’s and play their first official game for the Falcons. FHFC have some very talented players coming through and if we don’t lose them to SANFL or higher clubs then we will be in great shape in the coming seasons. As Ben has aged out it is with a little sadness that I say good bye to the sub junior programme after 6 years. A massive thank you my wonderfully supportive wife Mel and all the parents who have come on the journey and helped out along the way – See you at the footy.

A super 2020 season for the U12 Blues concluded at Noarlunga last Sunday. There was a tear or two in the air, as the bulk of the team had reached the end of their Subbies journey.
As everyone knows, it was a season like no other. A reduced fixture, abbreviated training sessions and no carnival. But nobody complained because we got a chance to do what we love, and there were plenty of moments not so long ago when we didn’t think that was going to happen.
It has been a pleasure and a privilege to have been associated with this team. The boys are a credit to themselves, their wonderful families and the great club they represent.
Their respect for the umpires, other teams and officials was brilliant. And they all worked hard to improve and develop their skills and teamwork.
We enjoyed great success this year, and there were many highlights. But for me none was more special than the first training session. The pure joy and excitement on the faces of these kids as they returned from a big black hole will stay with me forever.
A big thank you is owed to so many people who contributed to a successful season- Nichola and Leigh Gould as our medics, Russ and Jo Elliott as team managers, Craig Mannion as runner (and Shane and Riley Lynch who deputised while Craig was on sick leave), and everyone else who helped
out with canteen and bbq duties, time keeping, goal umpiring etc etc
Thank you to my sidekick Leon Burckhardt, who is so much more than an assistant coach. To Mel and Michael Haslam for the massive hours and workload they contribute, and to superhuman Bec Couldwell, who for some bizarre reason thought Subbies Coordinator wasn’t a big enough job on its
own, so she donned the orange jacket on game day as well.
And to Neil, Kate and the committee for the tireless work they do both behind the scenes, and in many cases, front of stage on game day.
Finally, and this extends beyond this season, but a massive thank you to Simon and Janine Timms at Radical Torque Solutions (RTS) for their sponsorship of the Subbies over the past four years. As we all know, without the generous support of our sponsors things just wouldn’t happen.

From all of us at FHFC thanks to our Subbie Sponsor Radical Torque Solutions for their ongoing assistance.