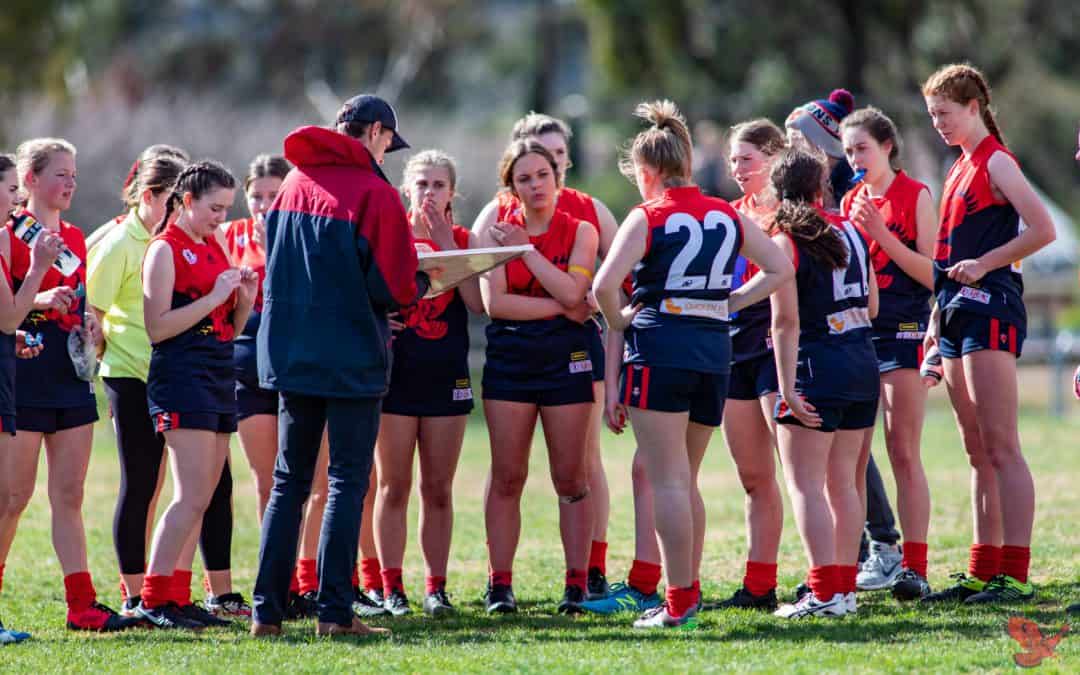 This week we took on Christies beach @ Noarlunga in the 2nd semi Final and with this year being a top 4 system it meant the winner would get the week off and go straight through to the Grand Final. We knew Christie’s would come out strong and full of run so we had to absorb their pressure and make sure our own intensity and pressure were high, we managed to kick with the wind in the 1st quarter and take full advantage of it kicking 6.5 to 0.1 albeit a bit fortunate they didn’t have more on the board as one of their key forwards had a shot from 15m out directly in front and kicked into the man on the mark. The second quarter was a battle as they outscored us 2.3 to 1.5 however the margin was still 6 goals at half time. We spoke about lifting defensively all over the ground in the third quarter and the mids & Fwds responded, on the back of our defensive work the scoring opportunities started to flow with us scoring 6.8 to 2.0 to set up the win. The last quarter played out in the fashion of a second chance final where we did what we had too and they put the cue in the rack a bit with an eye on next week. David Kearsley was a workhorse again, Sam Tharaldsen gave us good drive from half-back and Andrew Shearer was solid all day.

This week we have the week off so the boys will recover and prepare as best they can for the Grand Final in 2 weeks.

After doing battle as two undefeated teams in the final minor round of the year, and playing out a draw, the Falcon and Shoe B Grade teams came up against each other again in the first week of the finals; and the game did not disappoint.

Both teams made some personnel changes for the first final, and after a strange start to the day being out on the oval 35 minutes prior to the first bounce, both teams settled quickly and got into another tight battle.

Nick Bailey started strongly kicking the teams early goals and at half time, when each team had kicked with the breeze, we took in a 4 point lead.

The theme of a tight contest continued through the third quarter and at ¾ time, the scores were locked away at 8.3.51 each.

The final quarter saw Flaggy miss two gettable opportunities early in the quarter only for the Shoes to get up the other end a kick a goal themselves and then retain the ball towards their end of the ground for a majority of the last quarter.  Thankfully, a few of their final shots on goal were wide of the mark and after several attempts to get the ball inside our 50 (which were well defended by a very good Shoes outfit) we were able to make one final run of it and kick a winning goal with less than ten seconds to spare.

The win grants the boys a week off and most importantly a spot into the GF which is what we have been working towards.

Hello all,
Saturday we played Happy Valley at Noarlunga Oval and it was not a pretty sight losing 9.16 – 3.1.  With not much upside other than the efforts of Twistie Smith and Aiden Grayson who were very good.   We were bullied and pushed off the ball too easily.  We did have some good moments but not enough of them and at this time of the year that type of performance won’t cut it.  Time for a reality check with some of the lads and move onto another big challenge against Reynella.

We rolled out on Friday night for a knockout Semi-Final against a plucky Aldinga team. While the score looked comfortable at the end it wasn’t until well into the 3rd quarter when we got full control of the game. Aldinga brought enormous pressure and made the boys work very hard for the win. A very pleasing result and we look forward to the challenge back at the same time/venue this Friday night against Reynella.

After a great win last week we progressed to the Preliminary final which saw us face Christies Beach at home. Having not beaten them in our 2 matches this year we knew our best was required to give us a chance. Pre game I asked for strong pressure and composure with the ball. The girls delivered that in spades. From the start the girls tackled the lights out. This enabled us to be right into the contest trialling by 1 point at both qtr time and 10 at half time. Our defenders were outstanding all day, turning defence into attack and providing us opportunities to score. In the last quarter we got within a point with 7 mins to go, but were unable to score twice in a row and we went down by 3 goals. As mentioned the defenders were excellent all day, with Jasmin Partridge, Sienna Chapman and Imogen Russell leading the way. While we lost the match and our season ended there, I was so proud of the performance by the girls and we left on Sunday knowing we could not have done any more.

I will take this opportunity to thank all of our players, families, coaches, trainers and Neil & Kate for your support through a season that was like no other but still incredibly enjoyable and rewarding. See you all at end of season presentations.

This was our final home and away game of the season and it was simple… win we play finals, lose and that’s it for season 2020. This was a big ask as we were soundly beaten by these guys last time and we went into the game severely undermanned due to injury and illness.

We had 14 available U16.5 lads with five U15 lads stepping in to make 19. It was a question of heart whether the boys were in for the contest or not and this was put to rest in the 1st Qtr with us laying 18 tackles to send a message to the opposition they were fair dinkum about their footy.

It was an arm wrestle all day and it came down to the very last kick of the game (after the siren) by Tommy Esser to win the game. With nerves of steel he slotted the goal to get the win by a solitary point and into next week’s Finals.

With belief, anything is possible.

After a tough month the boys bounced back with our first away win of the year over at Blackwood. It was a great game of footy, played in excellent spirit with no more than 2 goals in it at any stage and a lot of mates going head to head on both sides.

A very enjoyable day at the footy to finish off the SANFL season. It has been very pleasing to get 11 games of footy into these lads and see them develop throughout the season, thanks to everyone that assisted getting this team on the park every week and in particular our Team Manager Shane Lees and runner Michael Galliford, your support has meant a lot.