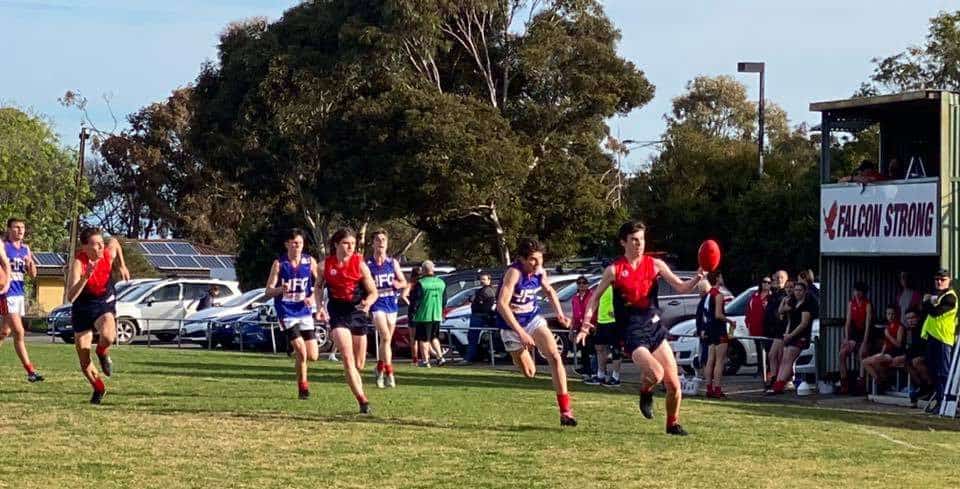 If this year isn’t weird enough already we played Reynella in one of our 2 double-up games this year but we played them as the home team at Aldinga while the B grade and Under 17.5’s had a bye, it created a different environment and some of our timing was off due to this. That being said the boys still put in a very good effort with the end result being an 81 point win. To watch the game and not look at the scoreboard it felt like it was a lot closer than that as Reynella put up a good fight and as per the first time we met them this year they played an emotion-charged fast-paced game style and it took a little while for the boys to shake them.

We had a chat at half time about tidying a few things up and also lifting our energy as we seemed a bit lethargic and from there we went on to score 9.6 to 0.1 and put the game to bed.

Brad Kirk was outstanding all day down back along with Luke Beenham who had an excellent game, Mitch Johnson Kicked 3 goals (the second of which had to be seen to be believed) and David Kearsley was solid all day as per usual and snuck forward for a couple of goals as well.

In a strange season we headed to Happy Valley to play amongst a full day of HV/Noarlunga games, it was a critical game for us as HV are vying for the same spot in the finals as we are and it’s never an easy match up. Pleasingly we played to our strengths and controlled the game from the 1st bounce without putting the score on the board, early in the 3rd quarter they scored their 1st goal and we were only 1 goal up however we then kicked 4 in a row to confirm our dominance.

Our top 5 players were all bottom aged boys which show how comfortable they are now at the level and how our depth is going to be our strength over the next 6 weeks, it’s going to be tough at the selection table, but that’s how it should be.

A-Grade women took on an under strength Aldinga team which can always be a challenge knowing that you should win as long as you stick to your structures and play our game and to the girls credit they did just that and in the process scored the highest score for the Flagstaff Hill Football club so far in our history 16.19-115 and the highest score by any team this year.

The mid field was totally dominant through Riley Mitchell and Soriah Moon tapping to our mid field runners who consistently hit targets up forward and if the ball did happen to get into our back line we had superb control through Mikayla Willis and Tamsyn Morris who repelled most of the opposition attacks and combined with Nicole O’Connor who was reliable as always it was going to be tough for the opposition to score.

Our forwards all got in on the action with Soriah Moon kicking 5, Nicole Mogg 3 , Katherine Wise 2, Carli Morton 2, Kelsey Rodman 2, and 1 each to Riley Mitchell and Hannah Griffin with so many goal scoring options this made it very difficult for Aldinga to match up on our girls.

We take on Morphett Vale this coming weekend at home which will be a much bigger challenge however the girls are ready and looking forward to the games ahead.

Round 6 saw us travel to Happy Valley, having lost to them two weeks ago we knew we had a challenge on our hands. With some players returning from injury we had confidence that our best was going to be good enough. Unfortunately, we didn’t start well and gave them a 4 goal lead at quarter time. From there we were playing catch up all day. Our second and third quarters were much better, we lifted our tackling pressure and were able to move the ball forward, however we were unable to trouble the scoreboard while have many opportunities.

Usual suspects in Ebony Scanlan, Mel Anderson and Brooke Kleinig all got plenty of the ball and worked hard all day. Unfortunately Charlotte Williams has broken her collar bone, we wish her all the best and a speedy recovery. On a positive note Sasha Nancarrow made her FHFC and football debut and played well.

Now with only two games to go, we must keeping looking forward and we get ready for another big game against Christies Beach at Home!

It was a welcome return to be back playing at home after a month on the road and it showed with the quality of football the Flaggy boys put on.We had an upset lead up to the game with no access to our home change rooms due to an Aldinga player injured from the previous game. It has to be said though this seemed to be the catalyst for the team to jump into gear.

The Flaggy boys 1st qtr was their best 20 mins of footy for the year so far.We dominated in all areas but it was mainly our tackling pressure that had the opposition looking over their shoulder. We ran out winners by over 11 goals and with a top four spot on the line this was a handy percentage boost.

Congratulations to Joshy Faizal on reaching 100 junior games for the club and topping it off by being Best on Ground. Also well done to Cooper Ames on reaching his 50 game milestone and to Lochie MacNab who also notched up 50 games coming up from U15s. Now the focus is on Modbury this Sunday being played at Kenilworth and after knocking them over with the last kick of the day last time out this will be a cracker.

Well, we had a different game today with Hackham only having 9 players and we had 19 players. So I played two different teams one quarter on and one quarter off to the girl’s credit they played a solid 4 quarters for football, and ran away winners 15-12 102 to 0-2 2 points.

Our best players where Kaitlyn Aldridge, Ava Taylor, Georgia Roberts and the goalkickers were Ashlie 5 goals Georgia 4 goals Amali 3 goals and singles to Lyla, Ebony and Mia.
With only a couple of weeks to go before finals, we are starting to play some good footy
If we can sneak into the top four you just never know.