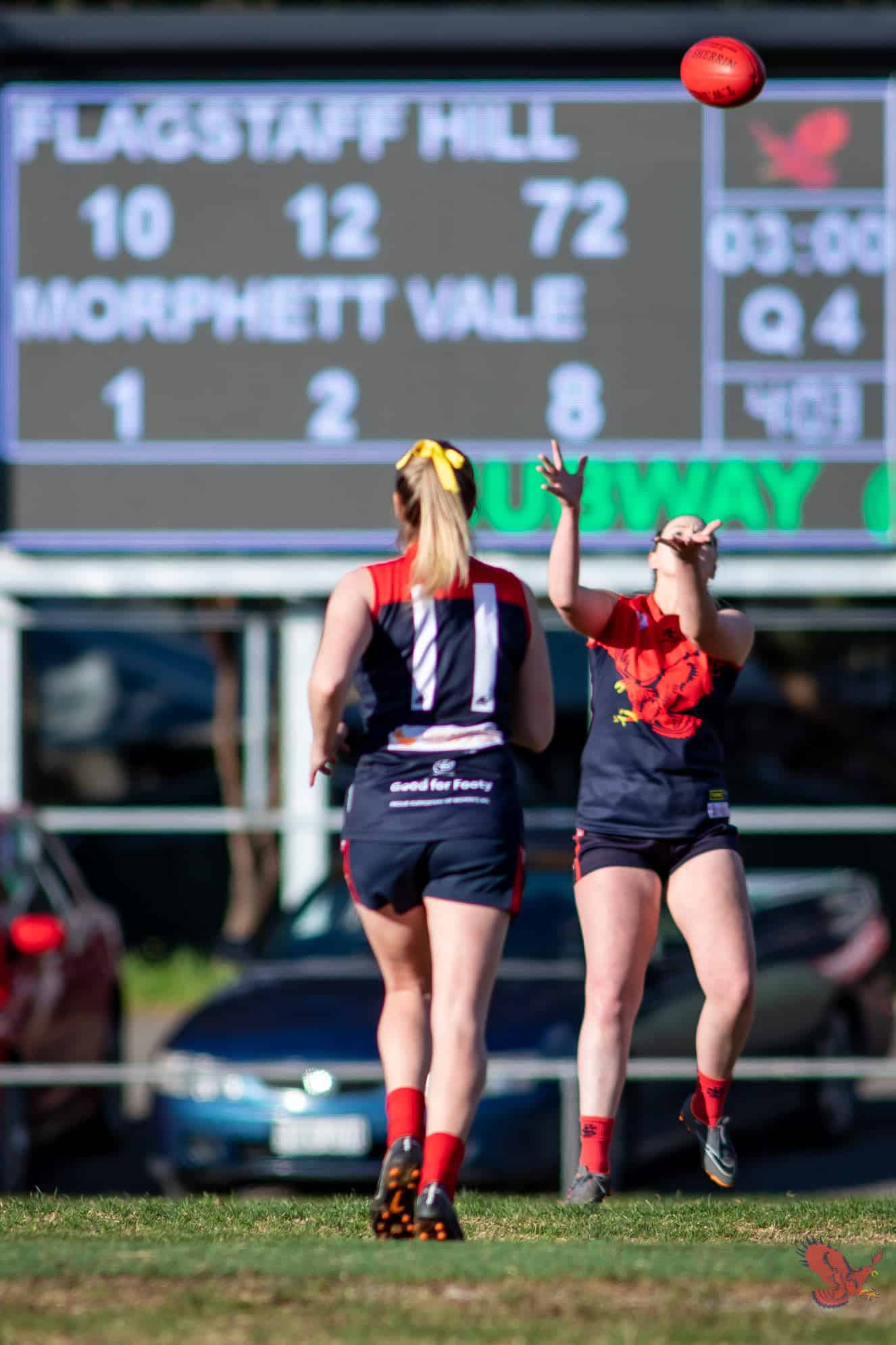 We travelled to play Cove at Cove this week and with them not travelling that well I put it on the guys to set themselves some goals to try and achieve, Goal number 1 was to win the game which we did 23.19 to 6.5. It is always weird playing at cove as the ground is short and the pockets are very wide so obviously the shortest way home is up the middle which we tried to be consistent with, however there was a strong breeze coming off the ocean blowing across the ground to the North Eastern pocket which made it hard.

Cove to their credit were a better organised side than some others we have played this year and they stuck to the task for the whole day, the game was hot early and they were up for a fight (as have been all our opposition this year) however we managed to kick 3.5 to 0.2 into the breeze. The second ¼ was where we put our foot down and managed to score 9.4 to 2.2 with the breeze, the guys were focused on their goals and not achieving them was not an option which went a long way to being the reason we scored so well.

The second half played out in our favour with us scoring 11.10 to 4.1 to run out 116 point winners. Michael Shearer was electric early and played a good four ¼ effort, David Kearsley continued his good form, Ryan Mountford snagged 5 goals and Brad Kirk was the general down back as usual. We also had an A grade debutant in Blue Pearse who went really well and did not look out of place.

This week we take on Christies at Home.

The B Grade were very excited to arrive at Cove on Saturday to see the sun out and the oval dry, following all of the rain we had overnight.  Despite the strong breeze, and kicking into it in the first quarter, the team were able to set up the result early kicking 8.3 to no score.  In fact, the team kicked more goals into the breeze than with it over the course of the match, showing how hard they worked and how structured they remained for the full 80 minutes.  The final score being 32.14.206 to 1.1.7.

The 199 point margin will be memorable to two guys in particular, the first being Tynan Carney who played his first game for the club and bagged 4 goals and especially to Craig Langcake who played his 200th senior game and marked it with a very difficult set shot goal in the second quarter, using the breeze beautifully to his advantage.

The team are aware that Cove were not at full strength and have two big challenges coming up in Aldinga and Noarlunga and look forward to these games to test and prepare themselves for what lays ahead in September.

Hello everyone,Saturday we went to Cove for what was to be a hard fought contest against a team that plays their home ground very well and are 4 goals better when they play there.We have had lots of outs over the last couple of weeks with SANFL and other  commitments so to win by 7 points was very satisfying and a bit of an eye opener for the boys. The belief, camaraderie and character from normally quiet, reserved lads has started to come to the surface. Now the ride begins.
Thanks Marty

A weird feeling having no game before us, however we took advantage of the extra time on the oval for a full warm up, including some structured training drills to make sure we were ready to go from the 1st bounce. We started well, which hasn’t always been the case lately, and had the game well under control by halftime. We then moved the magnets and gave all the boys a different challenge for the 2nd half, but with the instruction to remain consistent with our game plan and structures. Pleasingly we did this and we got some further development from the group as we push towards finals qualification, this is fully within our control and  a win next weekend will lock that away.

With the team coming off the bye the boys had a week off to refresh. We knew going into this weeks game against Cove it was going to be a hard battle.
But with the boys taking charge of training and owning the drills it left the coaches with an air of confidence going into the game. Friday night footy was an experience for the team and despite going in with five u12s to face a bigger unbeaten Cove team, the boys took on the challenge. Unfortunately, the bigger lads of Cove were running faster and harder for longer and leading our team to the footy. The boys held their own, keeping the undefeated cove to one of their lowest scores.  With two games to go and the boys having their individual reviews, we look forward to them enjoying their last home game next week against Aldinga.
Finish off, strong gents.
#goflaggies

Facing Christies Beach in Round 7, the only remaining undefeated team we knew we would be up against it. Our theme for the day was aggression. They got out of the blocks kicking the first two goals very quickly. The fought back but went into the first break 3 goals down. First half of the second quarter they controlled the ball and were able to put the score on the board. From the midway point of the second we worked our way back into the game, starting to winning our share of the ball and moving it forward.

The second half was a very even contest and we were able to completely control the last quarter and impact the scoreboard which was very pleasing. Jasmin Partridge was very good all day across half back, Abbie Butler competed really strongly and produced her best performance in ruck against some very good opposition and Charlie Scutchings in her first game back worked really hard and laid a number of strong tackles. We take a number of positives out of the game and know turn our attention to Morphett Vale for our last hit out before finals. Go Falcons.

Even though this was, in fact, our home game, the scheduling was such that in fact there was no room at Flaggy oval so instead, we travelled just down the hill to Kenilworth. Now after getting the chocolates last time against Modbury by a kick after the siren this was one game the Hawks would have been setting themselves up for.
We, however, played a ripping brand of footy the week before and was hoping to bring that same endeavour into this game. After ten mins of fairly contested footy, the Flaggy lads kicked into gear and went into the first break with a four-goal lead. The game was mostly played on our terms from then on and came away with a solid win which keeps us in touch with the top four. Well done to Toby Russell notching 100 junior games for the club. Thanks to Ryan Young and Riley Stone stepping in from U15s to give us a hand. We look ahead to the GOLD round this weekend which has us playing Golden Grove for the third time and looking to keep our good form going.

The U/14 girls hosted the game against local rivals Happy Valley on Sunday.In what turned out to be a physical encounter, the girls got up 11.8-74 to2.5-17 . This win keeps their finals hopes alive in a tight battle for spots3-5. Some great things to come out of the game;
Cascia Smailes kicking 5 goals and Ashley Clancy 4. Best players were Cascia, Sienna Aldridge, Kaitlyn Aldridge, Georgia Roberts playing her best game for the year, Ava Fox and Scarlett Clutterbuck coming back from a broken hand and setting the game alight. All in all just a strong all-round team effort. This makes next weeks game a do or die, Cove will be a great challenge for the girls and both teams need the win to make the final four.

We travelled to Walkerville who have dominated this division since they dropped down from Div 2 after the re-gradings. The boys were up for the challenge and we kicked 2 goals to their 4 in the first ¼, after that they took control of the game, however we still had plenty of opportunities but just couldn’t hit the scoreboard. The boys fought hard right to the end, gave 100% and pleasingly matched them in the last ¼. We were proud of their efforts and it was the closest game Walkerville have had for some time. Some great development from a few lads who had their best game of the season against stern opposition.