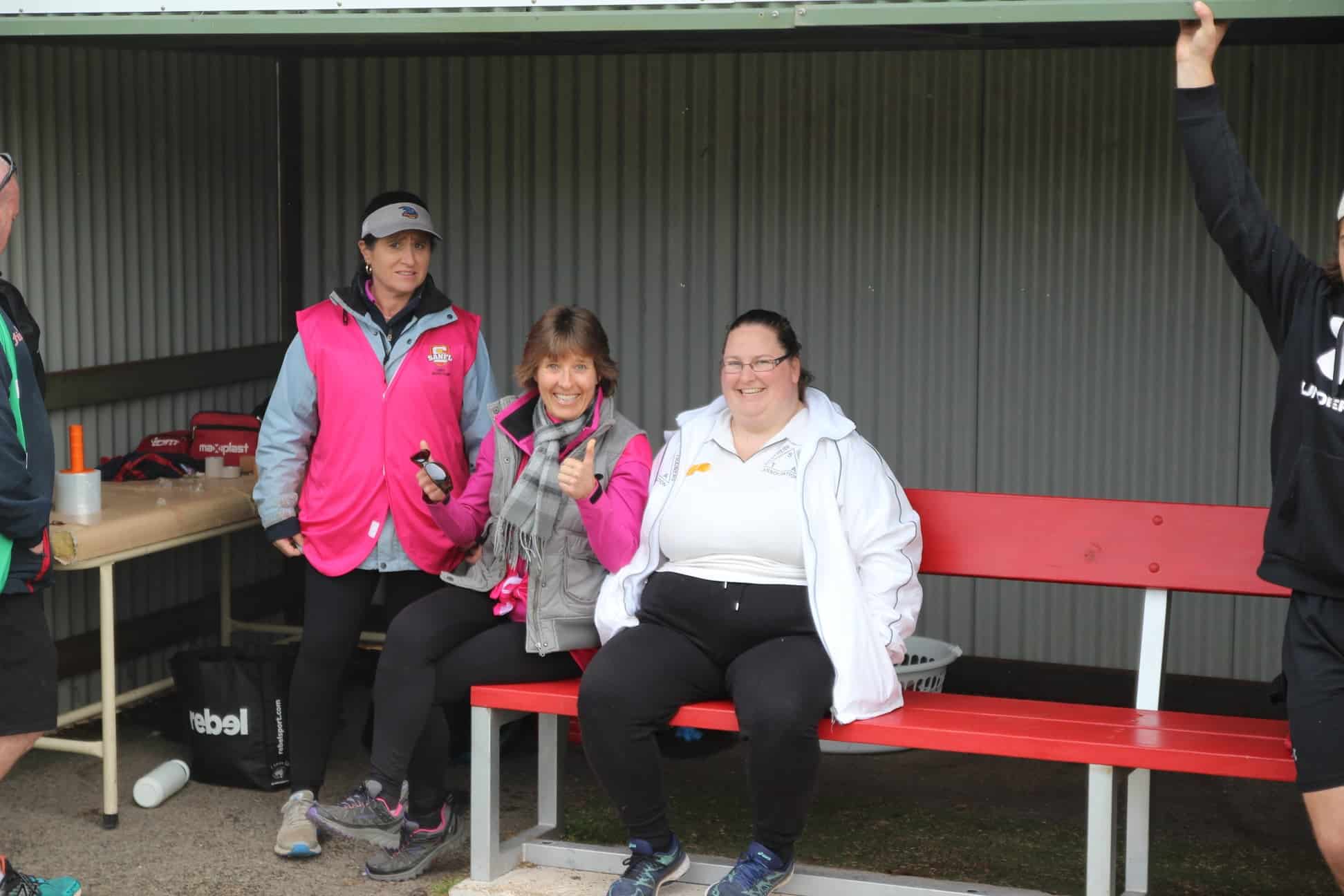 Round 8 had us taking on Christies beach in a top of the table clash, if we won we would secure top spot and the double chance in finals, we ran out winners to the tune of 72pts but most pleasingly we kept them to a score of 24pts the final scores were 13.18 – 96 to 3.6 – 24. It was a beautiful day aside from the howling breeze blowing to the southern end, we won the toss a kicked with the breeze in the first and took full advantage of It, we did however kick 4 points to start the match then the ball finally started to go through the middle and we finished the ¼ on 5.8. The guys knew they had to be on their game and get their hands on the ball in the second term to stop them scoring rapidly with the breeze, unfortunately Christies got the first 3 goals however then our intensity at the contest lifted and we managed to score into the breeze in the second half of the quarter and stop them from scoring anymore. We were up by 3 goals at half time but knew they would keep coming so we had to take full advantage of the use of the wind in third and gap them by enough so as not to give them a sniff in the last. They boys were fantastic and kicked 5.6 to no score, with an almost 10 goal lead at ¾ time we still had to be on our game and when we scored the first of the last into the wind Christies heads dropped. Max Renfrey was outstanding all day down back and stopped many of Christies forward movements along with setting up plenty of attacking movements for us, Brad Kirk in his 100th A grade game was again solid and Luke Beenham played well.

This week see’s us take on Noarlunga @ Noarlunga in a game I’m certain they have been waiting for so it will be a tough encounter that we will not take lightly.

The B Grade came up against a top 4 side in Aldinga on Saturday and following a big win the week before, looked forward to that challenge.  The first quarter lived up to this expected challenge and we went in at the first break a few points down.  The boys then got going in the second quarter, kicking with the breeze, and built a good lead in to half time.  We maintained and slightly built that lead and kept up our pressure and intensity for the second half but were never able to really put the opposition away.  Aldinga played a well structured and disciplined game and there were definitely some areas that we have taken away from the final quarter that we will want to work on in the coming weeks.

The 11.11.77 to 3.4.22 win has secured the B Grade a top 2 finish and we now move on to Noarlunga this week, last year’s B Grade Premiers, who are also undefeated and the result will determine who finishes on top of the ladder for the year – noting regardless of the result, we will play Noarlunga the following week in the first final.

Hello all,
The 17.5 lads hosted Aldinga on the weekend and we were all pleased to get a win in the way that we did.During the week we worked on a few things and were able to put them into practice during a game. This just gives more confidence and a few more tricks up our sleeve going into finals.Massive game this week against Noarlunga.

The boys ran onto our home deck where both SFL/SANFL teams had not lost all year, we were keen to continue that on and also knew that a win would lock away a finals berth. The boys delivered, despite a shaky 2nd quarter and we are hitting the crunch time of years with some momentum. They boys have now won 5 games in a row and we get to measure our improvement against Reynella on Saturday, we are all looking forward to it.

With a depleted u13 side due to injuries we once again had to call on the u12s to fill a side. Today we had six playing with a new debutant in Lachlan Tasker. Welcome mate. After being touched up last week by a bigger bodied and faster running Cove side we asked for more from the team at training then on game day too.  All the boys were excited to be a part of the gold round for our last home game. Thanks again to Nat Bunworth for talking to the boys about the meaning of the day. The boys started slowly and were peppering the goals without a major but then in the 2nd qtr turned it on and kicked 4.This was by far their best game for the year. The way they moved the ball fluently and in numbers was great to watch. And the unselfish actions of some was very pleasing as well. Also the boldness of some of the u12s was fantastic for them to take the game on. Well done lads.A win to finish at home was great for the boys to sing the song loud.

We took on Reynella at Reynella so always a challenge and we knew this would be a physical contest from the start and Reynella certainly crashed in early to try and unsettle our girls but to the Falcons credit they took no backward steps and really started to enjoy the challenge as the game went on.
The back 6 did an amazing job today under extreme pressure for a fair part of the game however led by BOG Tamsyn Morris (Nipper) the girls continually rebounded Reynella’s attacks giving our mids and forwards opportunities to attack with confidence. The shutdown role played by Kelsey Rodman on one of Glenelg’s leading forwards was also a massive win for us.
Soriah Moon with 2 goals was again a standout as was Shay Lee Dayman in the mid field both competed all day giving us plenty of drive forward.
The minor round stuff is now done and the girls have got themselves into second spot and earned the right to take on Christies in the first Semi Final next Sunday a challenge we are really looking forward to.
A special mention to our team manager Sandra Lowe who had a hell of a week however is a true professional and again got the job done for us on the weekend making sure all the girls were organised and on field ready to go. You’re a Ripper Sandra thank you.

RD 8 and final home and away game for the year saw us face Morphett Vale at Home. The Emus wouldn’t be playing finals this year and with this gave us a really good opportunity to put into practice some things we have been working on. In very windy conditions the girls played well in the first half to be 5.5 to no score. At half time we discussed moving the ball down the attacking side of the ground to allow us to score more easily instead of battling the wind. The girls took this on board and scored 5 goals and 4 goals respectively in the next two quarters to run out 95 point winners. When we have played well this season we have had lots of contributors and this was no exception. Our best three however, Mel Anderson (4 goals), Charlie Scutchings and Imogen Russell were outstanding all day.
We now prepare to take on Port Noarlunga in an Elimination Semi Final at Morphett Vale. We would love to see as many supporters as we can to cheer the girls on in what will be a tight contest.

Inspired by the GOLD round the day before, and coming off a couple games of decent footy the group was confident of giving the Kookaburras a serious contest.The Grove boys had given us a fair touch up the last two outings mainly due to us not being able to stick four quarters of solid footy together.Today it was on. The first quarter was played with high intensity and we went into the first break with real fire in our eyes.Then the rain set in and it turned into a real arm wrestle. The game was played with great intent and both teams should be proud of how they attacked the footy and never gave in.The kookaburras came away with a 17 point win but I feel they would be completely nervous if we meet them again in finals.Speaking of which, we are clinging on to fourth spot and so the last two rounds are vitally important we have a red hot dip otherwise we may look back a wonder …what If?Look forward to what unfolds.

Well this was a do or die clash this week we faced Cove at Cove and the winner went into the finals series and the girls wanted to win to make the finals for the second year straight. And did the girls put on a performance They were hard at the ball they did all the 1 % that I asked for, and runaway winners 5-6 36 points to 1-2 8 points goal kickers were Molly, Emma c , Scarlett, Hannah , Taiya all with goal best players were Emma Comley Molly Field and Ava Taylor .This week we play Reynella which we haven’t beaten this season but I know the girls are up for the challenge GO FALCONS

We headed to Woodville South keen to get back on the winners list, it was a great game of footy with the ball moving quickly all day on a dry hard deck. We just failed to make the most of our inside 50’s and fell away in the last 10 minutes of the game, it was tight right up to that point. The boys gave everything they had so it’s hard to be disappointed and stuck true to our Never Give Up theme. We still have 2 more games and look forward to finishing the season strong.