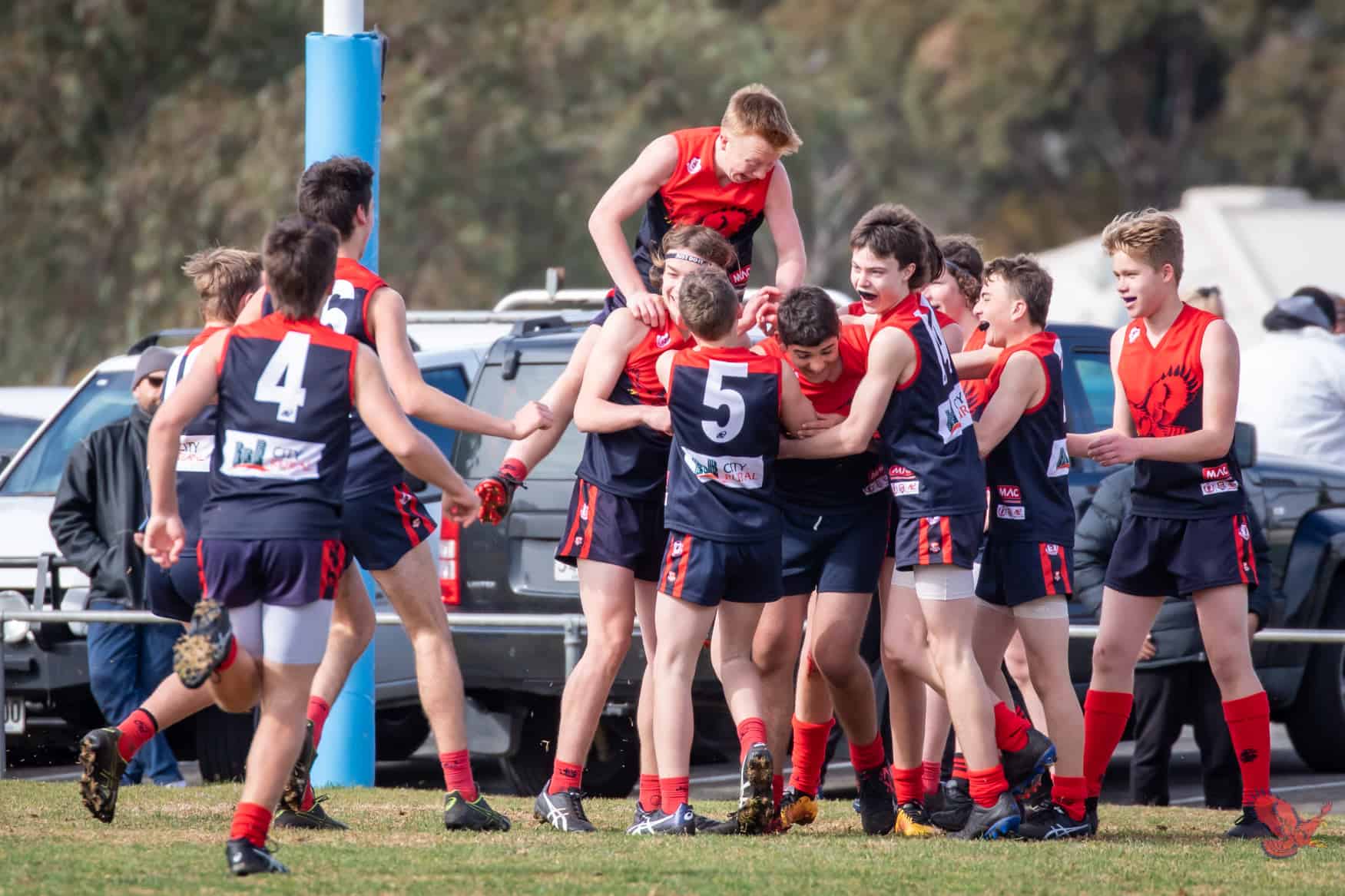 We took on Morphett Vale in what was another top of the table clash (they were equal 2nd) and knowing that they had knocked off Noarlunga only a couple of weeks ago we knew we were up for a game. We started well again with 7 goals to 2 in the first term but from there it became a bit of a slog, Morphett Vale crowded the contest with numbers around the ball and tried to run through us when they got possession however our backs were good enough to create turnovers and give us plenty of opportunity going forward.

The weather after ¼ time didn’t help as it created a slippery ball and with lots of numbers around the contest it became a bit scrappy, the boys were able to generate 72 inside 50’s though for 34 scoring shots which is a 47% scoring rate, only issue here was we scored 11 goals 23 points and I would have liked it to be 23 goals 11 points. All in all, it was a comprehensive win and move on to a rarity this year in a second match up with Reynella @ Aldinga. Mitch Johnson was outstanding early and contributed all day, Brad Kirk was the general down back as usual and Zak Cavouras continued his good form of the last couple of weeks.

There were a few late changes to the team selected on Thursday night but the team who suited up on the day were still able to get the job done on Saturday afternoon, and get it done well.

FHFC defeated Morphett Vale 13.8.6 to 3.6.24.  The team continues to work on the structures and type of footy that they hope gets them to finals and then holds up under the pressure of finals footy, and this was rewarded with another solid win on Saturday against a team who came prepared to play and were hard at the ball and contest.  Dec Tomkins, Matt Caire and Michael Comley were again solid and Craig Langcake had his best game for the year.

It was very much appreciated by the team that for once the rain held off for the midday game and decided to bucket down once we were in the rooms at 2.30! We get a week off with the bye and look forward to Cove in two weeks.

We hosted Morphett Vale on Saturday in what I perceived as a real danger game for us. We lost two players to their respective SANFL clubs and Morphies had dropped a couple of players from the A grade to play us.We played a very team oriented game and what we are doing well we are doing often and that has minimised what we need to improve on.  A nine goal win shows the depth and talent amongst pretty tight group of lads. Over half way now and with a break this weekend gives us time to re-energise, go flat out for the last month.
Another box ticked
Well done

The boys took to the field, wanting to continue the u15 group’s 6-0 undefeated at home season record. A bit of a sluggish start but then the boys warmed up and played some excellent team footy, working on our structures and team rules no matter what position we placed the boys in. We were able to give the boys different roles which they enjoyed. A big game for us next week at Happy Valley.

This week our team was heavily depleted due to sickness and injury. We had to call on seven u12 players to boost our side. Special mentions to Lachie McTaggart on his debut game and also to Ben Haslam for getting the call on gameday to make his debut as well. Great work gents. Other u12 players were Tyce Lush, Yaw Antwi, Riley Pedrick, Mason da Silva and Mitchell Clifton.  The team were looking to make amends against a hard running Emus outfit but were beaten on the day. The scoreboard didn’t really reflect the close nature of the game and the hard work our younger players were doing. The Emus made the most of their opportunities and scored well under pressure. Our stand in captain, Darcy Bielby was a stand out all day and took best on ground. Congrats again mate.

We took on Cove at home and after a tight first quarter the girls really got their running game going to take control of the game by half time.
Forward targets Soriah Moon with 2 goals and Nicole Mogg 1 goal we’re dangerous and with Kelsey Rodman really providing a physical presence our girls dominated the play for the majority of the last 3 quarters.

The back 6 were again solid with Carli Morton really strong in the air and controlling the back line.

Hannah Griffen was BOG with her stoppage work giving us first use of the ball on most occasions.

We welcomed Tamsyn Morris into the team for her first game after a great season with Glenelg and she controlled her wing and provided us with plenty of opportunity’s.

We play Aldinga next week at home as we try and cement our position in the top 4.

Round 5 saw us travel down to Morphett Vale to take on the Emus. Only having 13 players meant we were going to have to start well.

To the girls credit they did just that, controlling the ball for most of the first quarter. In the second quarter we put the foot down kicking 6 goals to 0 and taking an 8 goal lead at half time. The second half we controlled the ball and the game, consistently winning the contested ball and spreading to the outside to set up our forward 50 entries. In a super impressive performance the girls ran the game out well to win by 70 points.

It was an all played well performance from the girls, however, Jasmin Partridge, Brooke Kleinig & Jaela Manning were excellent all game but stood up when the game was up for grabs. We turn our attention back to Happy Valley, which is a really important game for us.

We knew this was going to be a challenge but this was one that we didn’t get going until the damage was done.The Ramblers scored fairly freely in the first term and we looked flat.

To our boys credit though they worked into game from the second qtr. We still found avenues to goal difficult mainly due to fumbly ball control while Seaton displayed clean use of the ball.

Again we showed real Flaggy spirit in the 2nd half and run the game out till the end.Another game and another experience gained. We head back home this week (first one for 5 weeks) and with U17.5’s having a bye this week I’m looking forward to having a team fresh for the game against Hectorville.

Today we had an absolute outstanding game by all players. I asked for the one percenters .. tackles, shepherds, smothers and voice today and they delivered. Our U14’s  played a solid  4 quarter game and it resulted in a win by 31 points. Super proud coach today.
Best players: Kaitlyn Aldridge, Emma Comley and Gabby Baker.

We had the opportunity to play on a Friday night at Edwardstown, conditions were tough but the boys embraced it with a great attitude which saw us only 1 point down at ¾ time. Unfortunately we had a poor last quarter which cost us the game, however I was very proud of the fight the boys gave and never gave up. We have a bye next Sunday and then look forward to the backend of the season with 4 games to go.