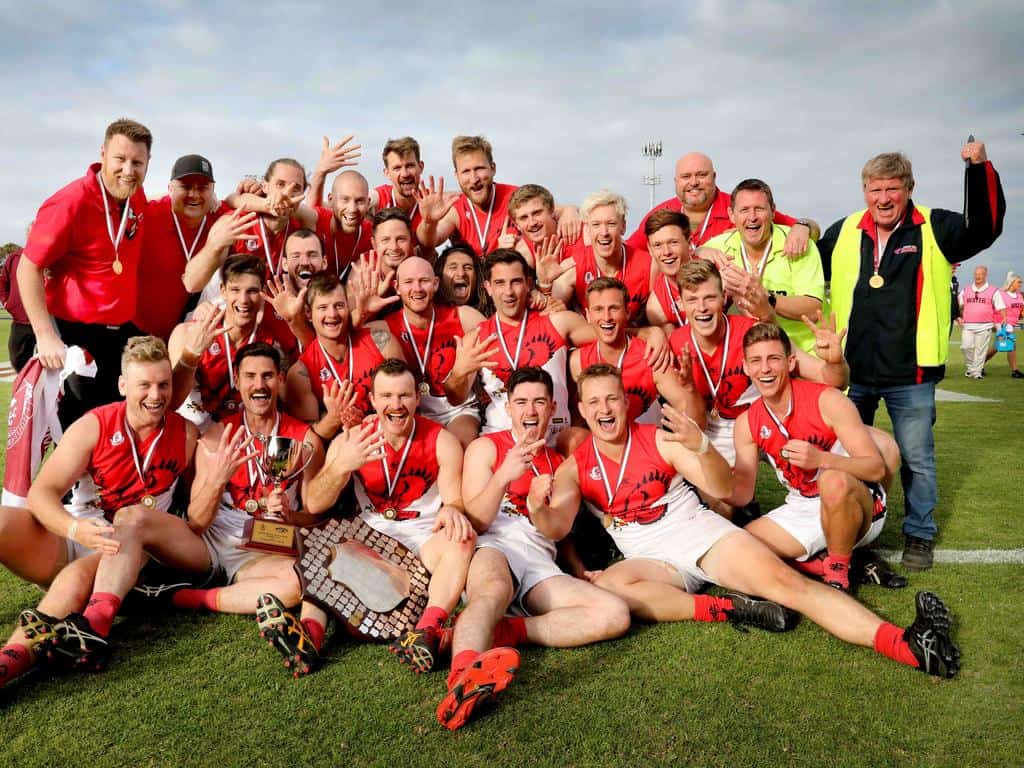 Saturday had us taking on the same opponent as last year however with the roles reversed in regard to paths to the Grand Final we were determined not to stumble at the last hurdle like Noarlunga did last year. We spoke all week about the first 10 mins of the game and the need to bring pressure and intensity so as not to give them a sniff, the boys did this fantastically well with a 9.3 to 1.0 first quarter. The second quarter was a bit of a fight with us winning it by 2 points and taking a 53 point lead into half time, we spoke about the need to more intense at the start of the 3rd as they would throw everything they have at us, the boys stood firm at kicked 4.2 to 1.0 for the term and the game was just about done from there. Noarlunga to their credit didn’t give up and got a couple of late goals to make the score line at the final siren 66 points. The day was about not being complacent with our season so far and Comradery and all 22 of the lads did those things for the whole 4 quarters. Sam Tharaldsen was a powerhouse off half back, David Kearsley was (as per usual) a workhorse and Daniel Webb was instrumental in the ruck.

After what seemed a lifetime (it was only two weeks since our last game) we finally got to run out onto the big oval at South Adelaide to take on Noarlunga for a third time in a row.  11 of our teammates who had played through the year and got us into a Grand Final, undefeated, missed out on selection and we were playing for them.  We also took on board how privileged we were to be playing footy in the testing year that is 2020, and even more so to be playing in the Grand Final.  And it was always going to be a battle given the last two games against the Shoes were a draw and then a on the siren win by four points.

Things started well with Bails kicking the first goal of the game and after a hotly contested first quarter we took in a one goal lead at the first break.

The second quarter was not good viewing if you were a Flaggy Support, or the coach for that matter, and in a very un-Flaggy B Grade like manner, our discipline was poor and after giving up several 50m penalties and easy goals, Noarlunga kicked away to a 5 goal to lead at the big break.

But, they call it the premiership quarter for a reason and with a few positional changes, the mids winning some clearances, and Daniel Nash and Macca Short providing the spark up forward, we were able to kick three goals to none in the quarter and take in a one point lead at the last break.

We kicked the first goal of the last quarter early and were then able to hold on to a seven point lead for the rest of the match to win the 2020 B Grade Premiership.

A massive effort by the team after a dismal second quarter and then only allowing the best opposition we had played all year to score two points in the last half of a Grand Final.

Daniel Nash rightly won the best on ground medal and he was backed up in the best players by Gates in defence (keeping the league leading goal kicker goalless) and Bails with three goals in attack.

There will be plenty of thank you’s at Presentation Night but a massive thanks to Pete and Marcus for supporting me in the coaches box this year, Timmy as the Team Manager, our trainers, Russ for his support from the A Grade and the Flaggy Hotel for their support of the B Grade Team.

Morning all,
WOW!!   FLAGSTAFF HILL 8.5 – HAPPY VALLEY 6.6
Well who would have thought that after a pretty tough year for everyone that we would have had a 12 goal turn around from the last time we played Happy Valley.  I was quietly confident, very confident.
I guess a little belief, a bit of luck and players that really wanted to play for the club and each other on such a big day will conquer just about anything.  I think that Saturday proved that working together, listening to instructions and just winning the little contests more often than the opposition, wears them down and gave us a huge advantage.
There were some fantastic individual performances throughout the game that lifted and inspired others.  The lads just did their bit when called on and did it better than the opposition.  True teamwork.
I could go on all day about the game and each lad but I guess winning the GF on Saturday will have a different meaning to each player and their families.
Thanks
Well done to all involved.
See you soon